Abdul Khader Pudhiyangadi, a vocal and sometimes an outspoken critic of Religion, has been convicted for 3 years of imprisonment on charges of blasphemy in the UAE.  He was very active in social media with his sharp and blunt criticism of religion, especially of Islam being an ex-muslim. He was arrested some months ago based on the complaints from supposedly squeamish Islamists who had been trying to quell Khader’s relentless and dauntless efforts to expose obsolete values and callousness in religious scriptures. Khader hails from Kasaragod in Kerala and he was running a service business in the UAE. He used to be an Islamist and later transformed into a freethinker after realizing the vanity and contradiction in religious values. Not only as an anti-theist but also as an Islamist before, Khader remained unflinching in giving blunt yet honest opinions through social media. He never faced such intolerance during his religious period but ever since he turned into a freethinker, pugnacious religious bigots have been trying to silence his voice. Threats of being trapped in blasphemy law were looming in the air since long time and even complaints were registered by different groups in Kerala. No religious and political ideas were spared in the sharp criticism which made him unpopular among those groups.

It is told that his critical and sarcastic videos citing translation of Islam scriptures were the basis of complaints registered in the UAE. Some Islamists allegedly translated his videos in Malayalam into Arabic and continuously approached police authorities to trap Khader in blasphemy law. Despite knowing the risks of going vocal against religion in a middle eastern Islamic country, Khader believed in the moderate and liberal approach of the authorities on such matters. Truthfulness and perseverance in his criticism as an atheist is something unparalleled and admirable as a person believing in honesty and freedom of expression. He had the opportunity to apologize for his opinions thus getting exonerated from the blasphemy charges leveled against him. However, he refused to apologize and go back from his stand against religion. The slander of political incorrectness against him from some corners is a strategy by religious groups to change the focus from the core issue.

The silence and lack of empathy from the so called pro(re?)gressive groups in Kerala on this matter shows the ferocious and intolerant nature of “elephant in the room”, Islamism. Islamists take out their victim card and disguise as democratic in societies where they are minority. Anti-fascist rhetoric groups brag about their anti-fascist efforts but shows “diabolic” silence on this matter. It shows the vanity of their spineless lip service against fascism. Many of them side by the political incorrectness argument against a person who is a victim of blasphemy law.

Blasphemy laws are a disgrace to modern societies and all those believes in freedom of expression shall unite globally for repealing such regressive laws in all possible ways. Freedom of expression is the breathing air to a progressive society and all efforts to curtail it shall be strongly opposed.  Voltaire said, “I disapprove of what you may say, but I will defend to the death your right to say it”; this should be the core idea of tolerance. 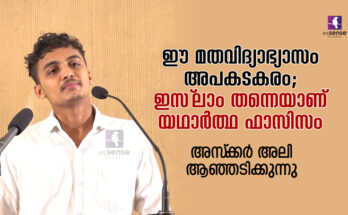 View all posts by esSENSE Reporter →